What would have happened if KITT, the Knight Rider car, had been able to speak with smart highways?

KITT, that fantastic car in the mythic television series Knight Rider (1982-1986) used to talk to its owner, Michael Knight; to the cars of the bad guys; and even to its mechanic Bonnie. It was a true prototype of the car of the future. And just think what it could have done if it had been driving on an ‘intelligent road.’

That fantasy is today a reality. The KITT of the 21st century is not a Pontiac Firebird, but the Symbioz Demo Car, a Renault prototype designed to test, carry out research and develop the technology of driverless vehicles: it’s the future of the mobility. And the road it drives on is not in Los Angeles but in Normandy: the A13 motorway, managed by the French concessionaire Sanef, a French  subsidiary of Grupo Abertis.

The sensors on the A13 make it a smart highway and check the state of the asphalt, detect traffic anomalies and help manage them. It’s a road that’s connected to its surroundings, capable of speaking to the maintenance men and to the cars that use it. It’s a fantastic road.

The sensors on the A13 detect accidents, visibility, the location of toll booths and stretches of road that are under repairs, functions that are characteristic of a smart highway

The Symbioz, for its part, brings together the latest advances in the motor industry, and is thus a prototype of the future of the mobility. It is an electric car, connected, and with level 4 of autonomous driving: it can move  by itself and the driver should intervene only if the system should require it or there is some kind of failure.

Its 36 sensors allow it to learn to drive in snow and through thick fog, and to react when presented with the unanticipated behaviour of other cars and to anticipate road work areas or to choose the best lane for approaching toll barriers. It can thus react to any adverse situation.

The A13 knows how to communicate with the car, another example of what the the mobility of the future will be like. The 40 kilometres of the motorway (which are also a testing ground) are equipped with Wi-Fi G5 technology by means of four telecommunications posts that send information about the traffic, road works, accidents, weather and the location of the tollgates.

The Symbioz is no longer on the roads but, after seven months of testing this driverless car in real traffic, has made it possible to analyse what preparation should be made –by automotive, technological, robotics, entertainment and infrastructures companies– for the cars of a future that’s just around the corner. 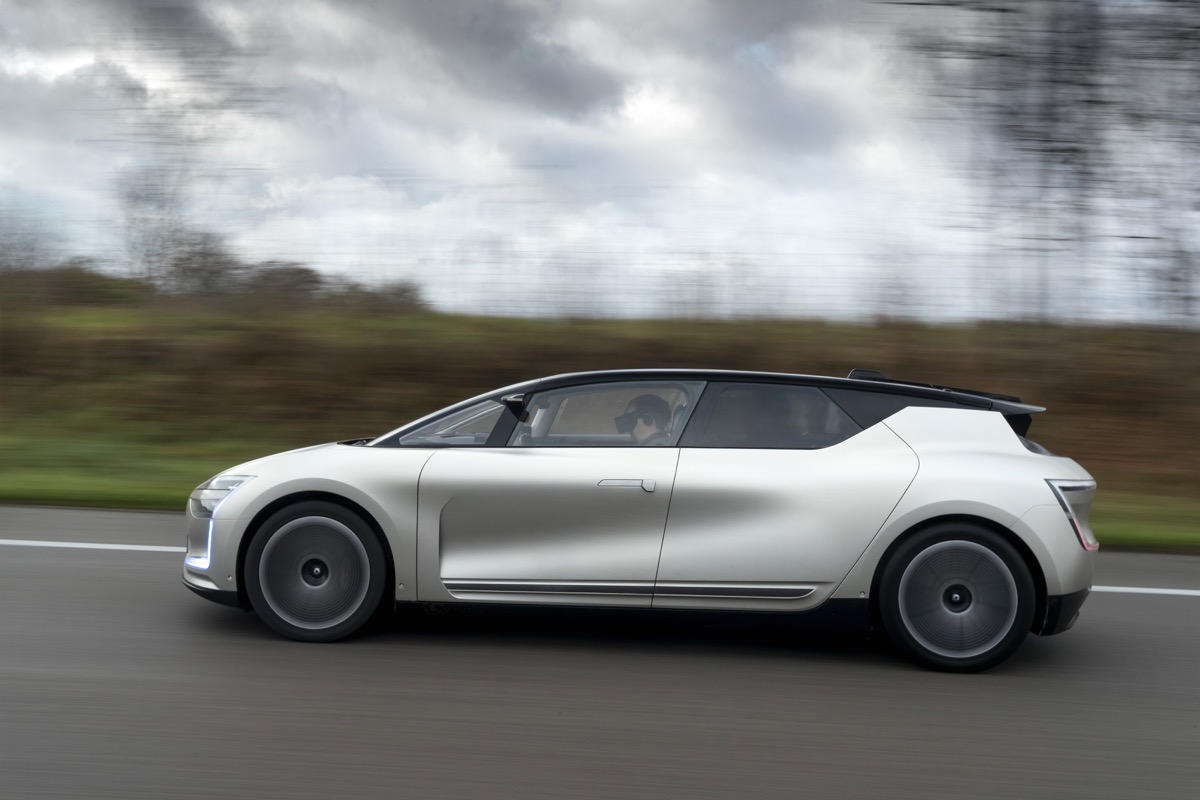 On the outside it looks like a new version of the mythic KITT, probably the first car that comes to mind when we think in the car of the future: modern, with luminous colours (yellow stripes when it is operated manually and blue stripes when the autonomous driving mode is activated). It has no rear-view mirrors but, in their place, small cameras that project the surroundings onto interior screens.

The differences are evident inside. More screens than usual. A control panel and a multimedia console. An augmented reality windscreen that indicates the vehicle’s trajectory. Different lights, scents and sounds for automatic and manual driving. And a joystick in the co-pilot’s seat in case a supervisor should retake control of the car in an emergency. Road safety is the priority.

This Renault car of the future prototype has different interior lights, scents and sounds depending on whether it’s operated automatically or manually. 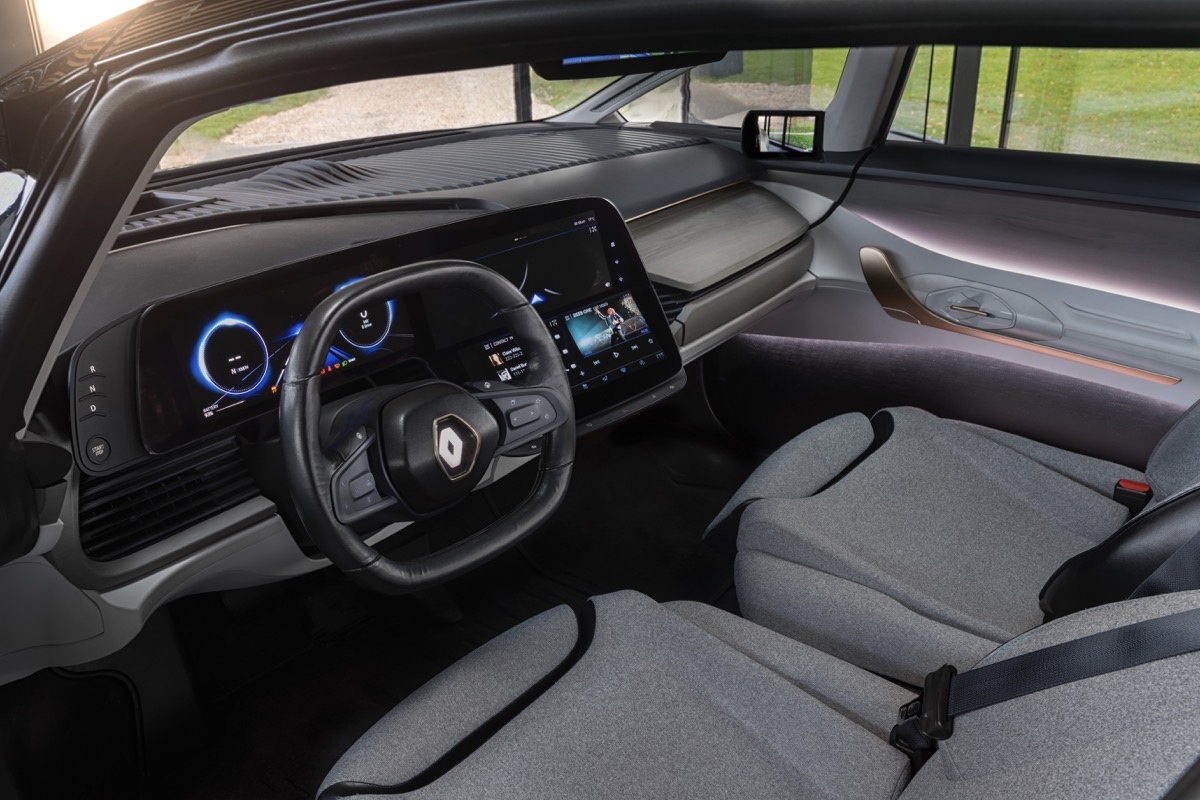 The driver starts the journey in manual mode (the special permission for the tests is only valid on the motorway) and he’s once on the A13, tells the car to take over the reins.

It then changes the interior light, the scent and the surrounding sounds. Without any transition, the Symbioz joins the traffic. With total safety it passes and avoids and road works. From time to time passengers are surprised by the flashbulb of the camera of some amused tourist.

A few kilometres later there’s an especially complicated moment even for the advanced geolocation systems of driverless cars and smart highways: passing through a tollbooth without stopping.

This car has different geolocation systems and uses high-definition cartography to choose the most precise positioning. The communications posts on the motorway are activated to show the Symbioz which is the best lane to use for passing through the barrier. The car moves toward that point, knowing that it has a margin of error of just 20 centimetres.

These tests allow automotive, technological, entertainment and infrastructure companies to prepare for the car and mobility of the future.

The smart highway sensors and the vehicle pool their information to facilitate the operation. The car, which is equipped with an automatic pay device, passes the toll gate with no problems and continues its journey.

Meanwhile the non-driver –the passenger– can enjoy his freedom: to watch an action film or listen to music with the seat in a 150-degree reclining position or travel into the future thanks to virtual reality glasses which, according to the experts, are the best way to totally disconnect from the driving.

This device takes the passenger along a futuristic and smart road of tunnels and bridges. Some lights pass beside him: the traces of the real vehicles driving along the A13 on this rainy day in June. Using the glasses, the world is increasingly futuristic and there comes a moment when the car seems to take off and blend into the air. The passenger finds himself suspended between virtual clouds, flying like a bird.

An experience that not even Michael Knight himself could imagine, the first person to drive a car of the future. 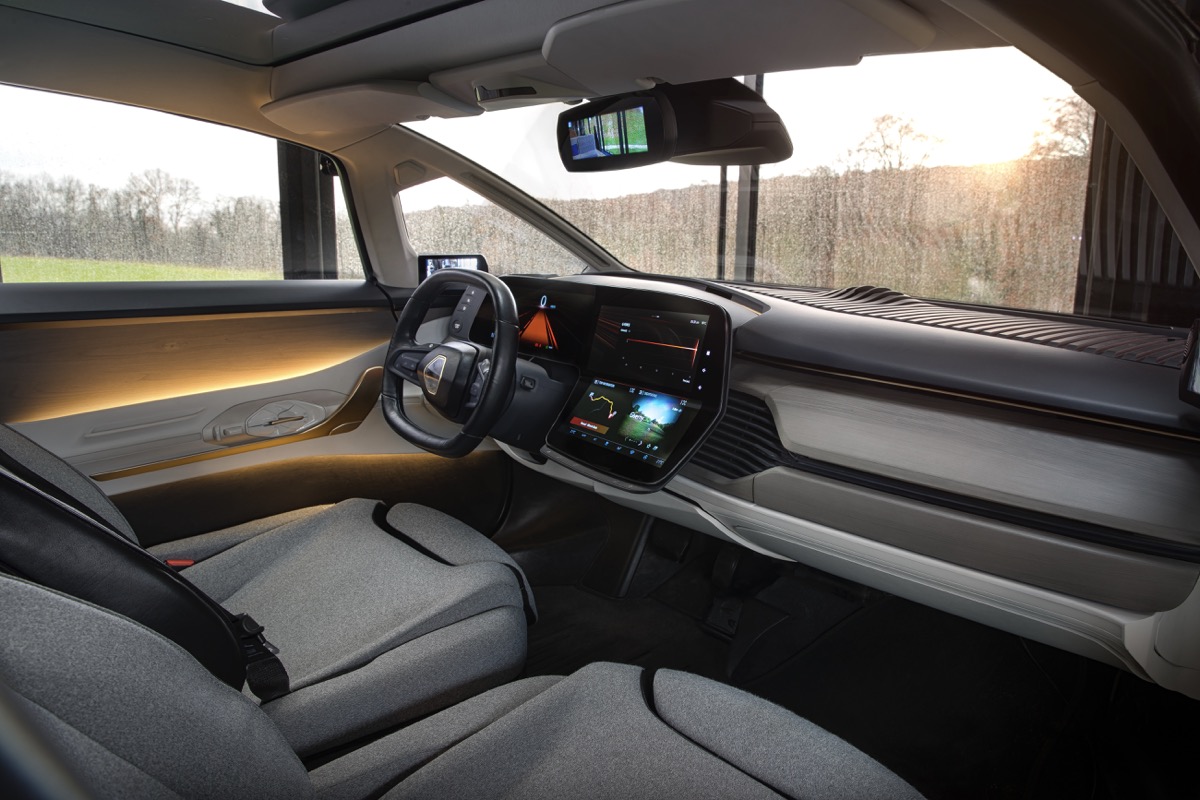 Characteristics of the A13 and Sanef: 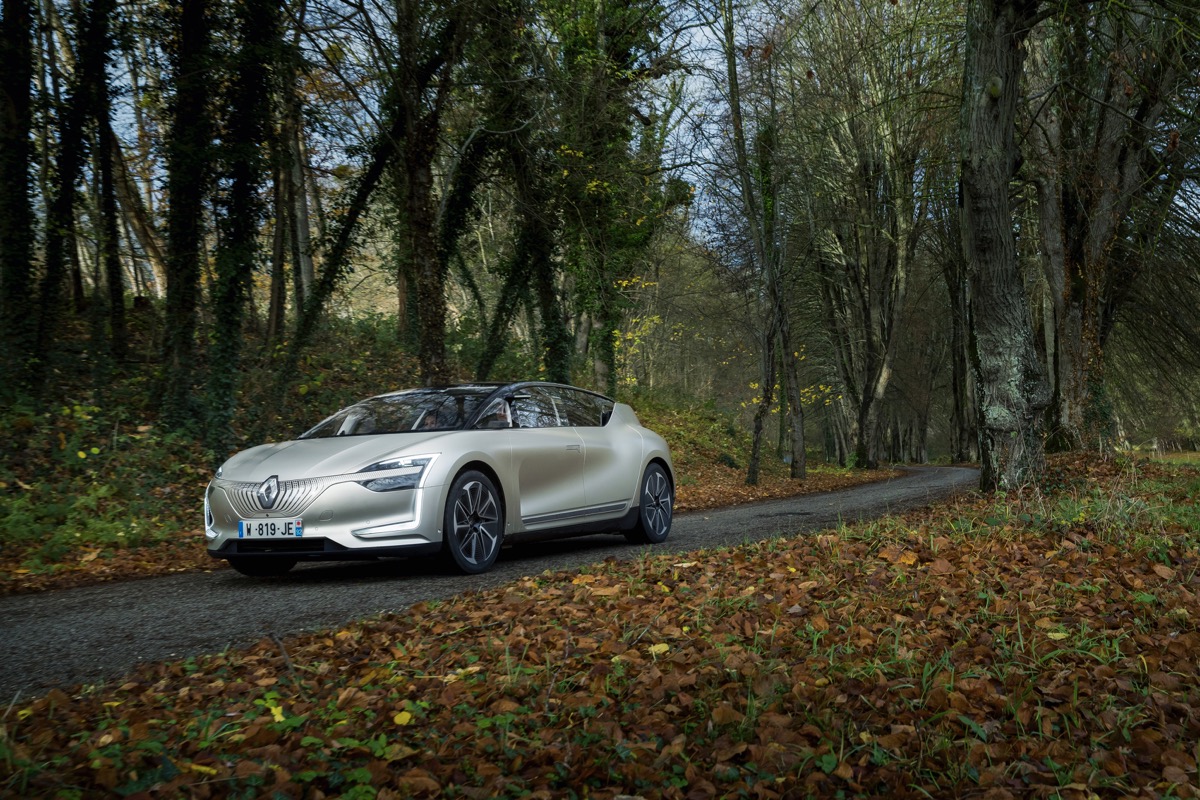