When a car is involved in an accident, it’s the vehicle itself that helps protect the driver and the passengers, but in a motorcycle crash it’s the body of the rider that receives the impact. And while airbags are an indispensable safety feature in cars, it’s very complicated to put them on a two-wheeled vehicle.

In 2019, some 417 motorcyclists died in Spain (148 of them in cities), accounting for 24% of the total deaths from road accidents. This data, along with the fact that there is an increasing number of motorcycles and scooters on city streets and other roads, moved the DGT (Directorate General of Traffic) to create a Plan of measures to protect motorcyclists.

As of May, 2021, in addition to helmets, they will be obliged to use gloves, a protective jacket, and pants and boots that are officially certified for the highway. The DGT also recommends adding some kind of integrated airbag system into this protective whole.

According to an article published last December in Tráfico y Seguridad Vial, the magazine of the DGT, a French report presented at the 2019 conference of the IRCOBI estimated that this system is effective and protects vulnerable areas like the thorax in impacts from 30 to 40 km/h. And according to the National Observatory of Road Safety of the DGT, the percentage of spinal injuries was smaller in those riders who used a jacket with airbag (14%) as opposed to those who used just normal protection (27%). In the latter cases, the chance of suffering serious spinal cord injuries is triple.

The mechanism of airbags located in vests and jackets is very similar to the safety clip on treadmills in gyms. The garment is attached to the body of the motorcycle and, in the case of a fall, the cord will note the pull and activate the airbag.

These garments have been on the market for some time and there is a wide range of models and prices. They protect the upper part of the body, but what about the legs? When there is an accident, it’s the lower part of the body that is most punished. That’s why the Airbag Inside Sweden AB firm has created a prototype of a blue jean with an airbag inside it.

On the outside, they look like normal jeans. But inside is a system to prevent a good number of leg injuries, and which is activated in the same way as the vests. The advantage of these pants is that they can be used again and again, because they can be deflated and refilled with gas. They’re made with aramid fibres and breathable fabric, and they’re resistant to water and scratches. They also have a filler of flexible foam capable of absorbing impacts.

It’s easy to imagine that the use of both garments, when the jeans receive the necessary safety certification and become a reality, will help reduce death and injury among motorcycle lovers, while at the same time increasing their safety on roads and in cities. Anything that saves lives is welcome. 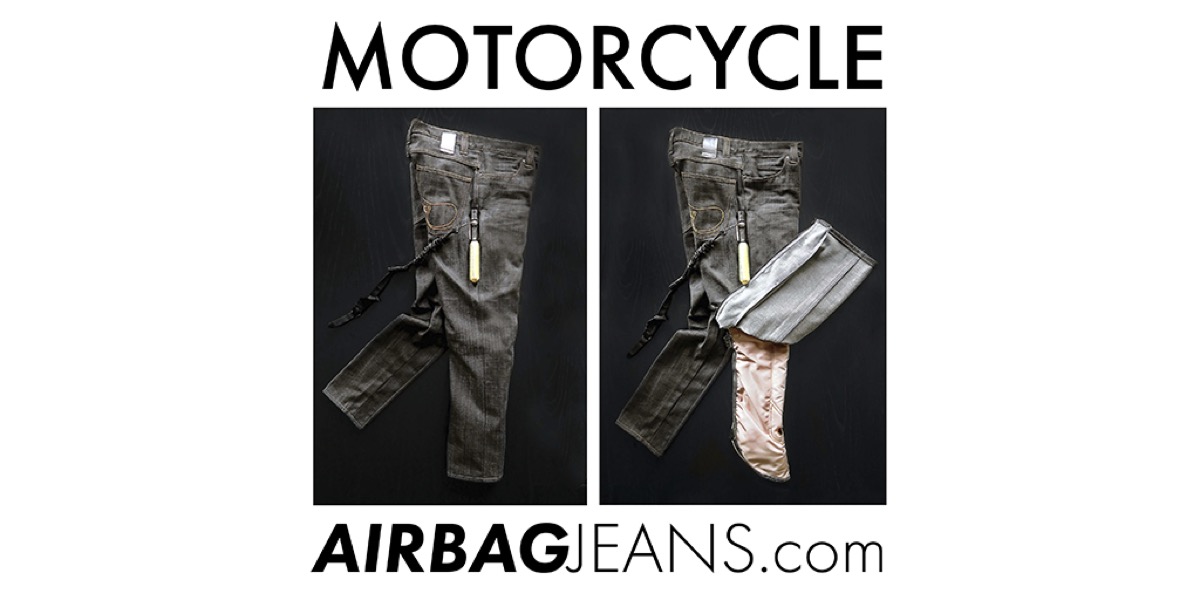