There are more than physical factors in Formula 1 racing. It’s one of the few sports where engineering is as important as the sportsman. Teams of the world’ best engineers compete to create machines that are more complex, precise and safe. And, of course, faster.

The best place to appreciate all this technology and research is in the steering wheel. Far from being the typical leather-encased circle that we mere mortals are used to, people like Lewis Hamilton have to deal with a complex device that more closely resembles the command station of the Millennium Falcon or some futuristic machine. The British driver and his team, Mercedes AMG Petronas, have shared some posts and videos to explain how this complex device works.

In spite of its great number of buttons and levers (up to 26, according to the driver) they should all be easy to use. We should take into account that the person driving will be using gloves and be moving at an average 210 km/h and under enormous pressure. “For that reason, we have to study the steering wheel until we learn it by memory,” says this winner of seven F1 world championships.

The steering wheel, which can be totally removed for safety considerations, costs more than 40,000 euros, is personalized and is made up of the following parts: 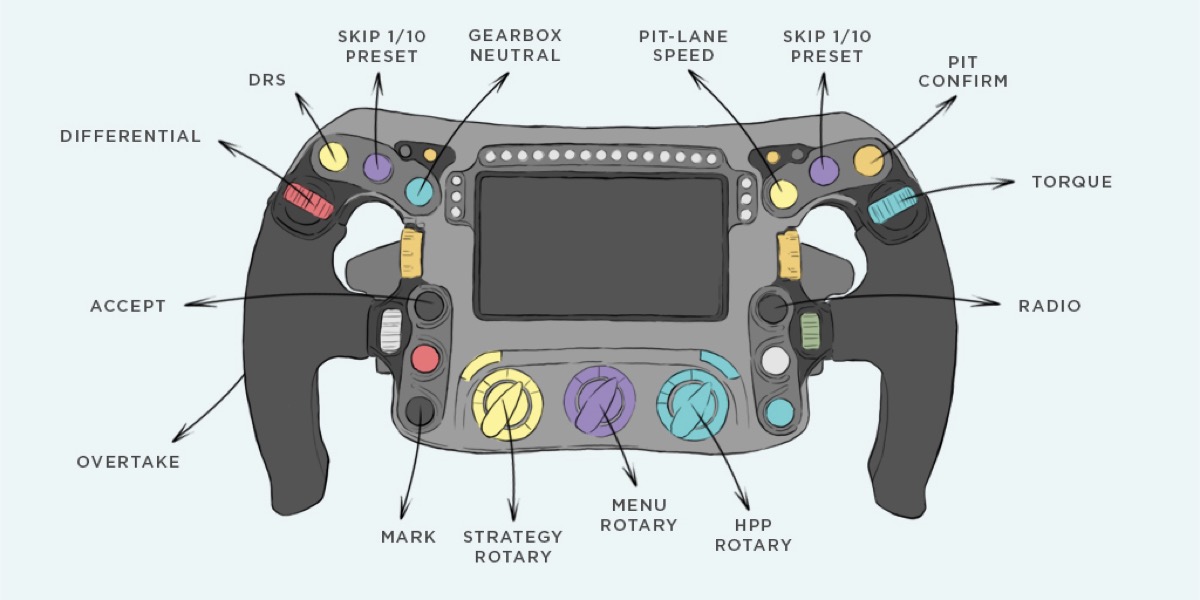 It is used to adjust the axis during turns and to maintain stability. The equilibrium of the car varies over the course of a race depending on the wear on the tires and the amount of fuel on board.

It can’t be seen in the photo because it is on the back side of the steering wheel, but this button gives extra acceleration to the car. It’s used for short, specific moments like passing another car, when maximum acceleration is necessary.

This button lets Hamilton interact with the car’s 100 control sensors, either to turn off one that’s defective or to turn on another for strategic reasons.

We’ve all made a mistake when shifting gears, and been left in neutral. But you don’t want that to happen when you’re going 300 kilometers an hour on the track at Imola. That’s why we have this button to cancel neutral.

This button limits speed to 80 km/h to protect people in the boxes and alert them to prepare for a pit stop without having to do so by radio.

It’s used to obtain a kind of throttle maps: if Hamilton steps on it hard, it will light up completely; if he does so softly, it will light up to more or less half. This serves to control the braking and make it more aggressive or gradual.

This confirms the modes selected by the Skip 1/10 buttons

El drag reduction system is used to modify the adjustable rear end to achieve an increase in aerodynamic speed of 10-12 km/h. It’s use is only permitted in certain zones and circumstances.

Instead of having individual levels, this switch “to go faster” allows Hamilton to alternate between a high-performance setting, which can be used for a qualifying lap, for example, and a setting that saves more fuel, which he would use during the race.

A control setting for the chassis and the fuel, respectively. These switches have 16 positions, each of which corresponds to a different menu of options.

With this button, Hamilton can indicate a point on his car –for example, a change of gear– that doesn’t sound quite right, so that it can later be analyzed.

A crucial piece of kit for Hamilton to communicate with the team. New rules limit what data can be broadcast, thus increasing what’s displayed on the wheel.