Outside of an exhibit of classic cars and motorcycles, it’s hard to see one of these things. But there was a time when these small vehicles were the kings of the road.

The sidecar is a vehicle attached to a motorcycle, normally to the right of the driver, and can carry one or two people. But what is its history?

The first sidecar was a chair set atop a wheel and was attached to a bicycle. It was invented in 1885 by the creator of the Star bike, G. W. Pressey, who named it Kirk. In this way he was able to elegantly transport his wife on their two-wheel outings.

Then the first motorcycles arrived, and soon became a good option for moving along city streets and country roads without having to work up a sweat pushing pedals. But there was still the same problem: how to transport passengers.

In 1900, the Oakleigh Motor Company in England called itself the first to manufacture a sidecar, although the French claim credit for the invention. In 1893, a French newspaper organized a contest to reward the best idea for comfortable and elegantly transporting passengers by motorcycle. Of course they were thinking about female passengers, because straddling the motorbike right behind the driver was frowned upon at the time. Three ideas were presented: the forecar (a tricycle in which the passenger rides in a seat in front of the driver); the trailer-car (in which he is towed behind the motorcycle); and the sidecar, designed by Jean Bertoux, who won the prize.

In 1903, W. J. Graham was awarded a patent and called this vehicle the sidecar. Starting then, other companies began to produce different models. In 1915, the American firm Harley-Davidson manufactured its first sidecar: it became so popular that the US Army bought it to carry machine guns. One objective was to chase and trap the Mexican revolutionary Pancho Villa, because motorcycles with sidecars were lighter and easier to drive in the deserts of Mexico.

It was their military use that most contributed to the popularity of these vehicles. Motorcycles with sidecars were fundamental in the two world wars because they could rapidly transport soldiers over almost any terrain. Unlike motorcycles alone, their greater space meant they could carry arms and even one or two wounded men. Germans, Americans, Italians, Soviets… All the combatants used sidecars on their infantry missions, for scouting and to relay messages.

The 1950s were the golden age for these contraptions, and movies contributed enormously to their popularity. The Marx brothers used them in one of the mythic scenes in Duck Soup. And many spectators remember the scene in I Was a Male War Bride where Cary Grant crashes a motorbike and sidecar into a bale of hay. But as the decade passed, and cars became cheaper and smaller, consumers moved toward travel on four wheels. So much so that production at the world’s largest manufacturer of sidecars, the Steib company in Germany, went from 50 vehicles a day in 1955 to just one-tenth that number the following year. This company, located in Nuremberg, continued to provide sidecars until 1965, exclusively for BMW motorcycles, but finally abandoned production entirely.

Nowadays it’s hard to see these vehicles on the road, but they have become real vintage collector’s items and something of a cinematic icon. Who can forget Indiana Jones and his father, played by Sean Connery, fleeing the Nazis in a BMW with a sidecar. And in Spanish cinema, there’s that mythic moment when Antonio Resines and Luis Ciges, his father in the film, arrive in a motorcycle with sidecar at the village where Amanece que no es poco takes place, directed by José Luis Cuerda. In Italy, there’s even a Sidecar Museum, in Cingoli, in the Macerata region. Among its exhibits are Peugeot and Triumph models from 1904 and 1910, now pulled by motorbikes, and some more advanced and sophisticated models from between 1956 and 1959.

Lovers of these vehicles can even buy one of their own on the second-hand market, at prices that range from 21,500 euros for a 1942 Harley-Davidson to 7,500 euros for a model by Ural, a company that has been making motorcycles with sidecar since 1940.

Driving a motorcycle with sidecar

While they are not common, it is still possible to drive a motorcycle with a sidecar in Spain. To do so, it’s necessary to have an A, A1 or A2 driver’s license, depending on the power of the motorcycle. The person in the sidecar must be older than 12, although some exceptions are made for children of 7 or older if the driver is a parent, tutor or otherwise authorized person. Officially-approved helmets must be used and the pertinent traffic norms observed.

The sidecar should be proportional in size to the motorcycle it’s attached to, have a red tail light so that other drivers can see how wide it is, a rear license plate, and a yellow turn signal light in the front. A brake on  its wheel is not required but is recommended. 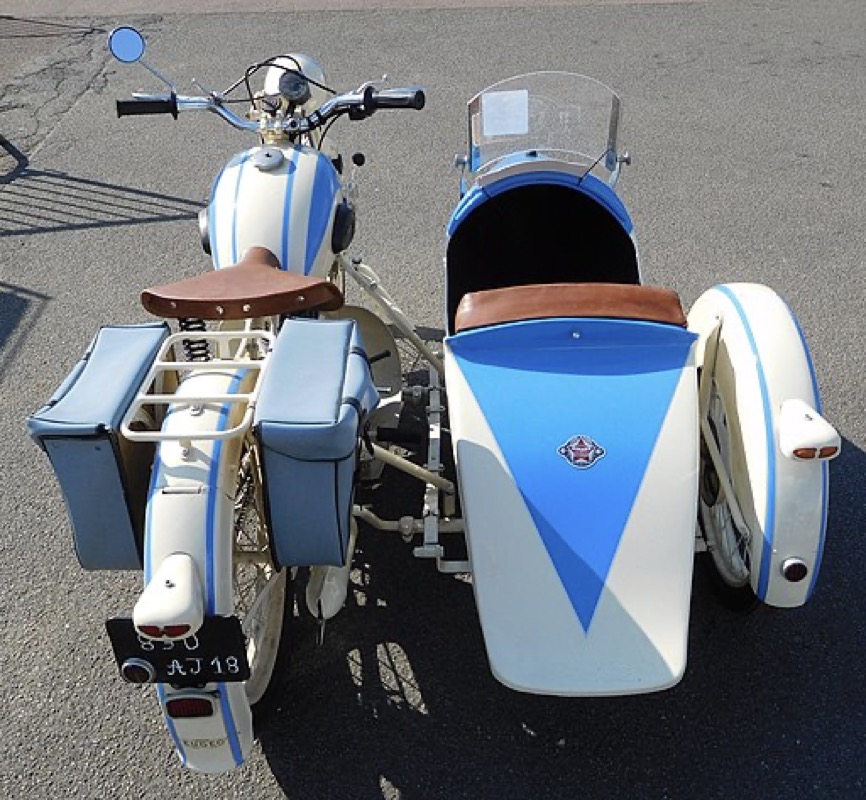