Up to 70% of the passengers traveling in vehicles on highways (although sometimes by other means of transport) have experienced it on occasion. For some of them, it is recurring. It’s that unpleasant sensation of dizziness and imbalance that comes on when the car is moving, and it can make the trip a real nightmare.

But why does it happen? The explanation is kinetosis, or so-called motion sickness. This produced because of the contradictory information reaching our brain when we move ‘passively’ in a vehicle. The state of motionlessness  of our locomotive apparatus does not coincide with the movement perceived by the organ of balance and the rest of the senses, which causes that sensation of instability that can lead to intense malaise.

Luckily, the concentration required to drive a vehicle prevents drivers from getting dizzy. So it might be said that being the driver is the best prevention against kinetosis. 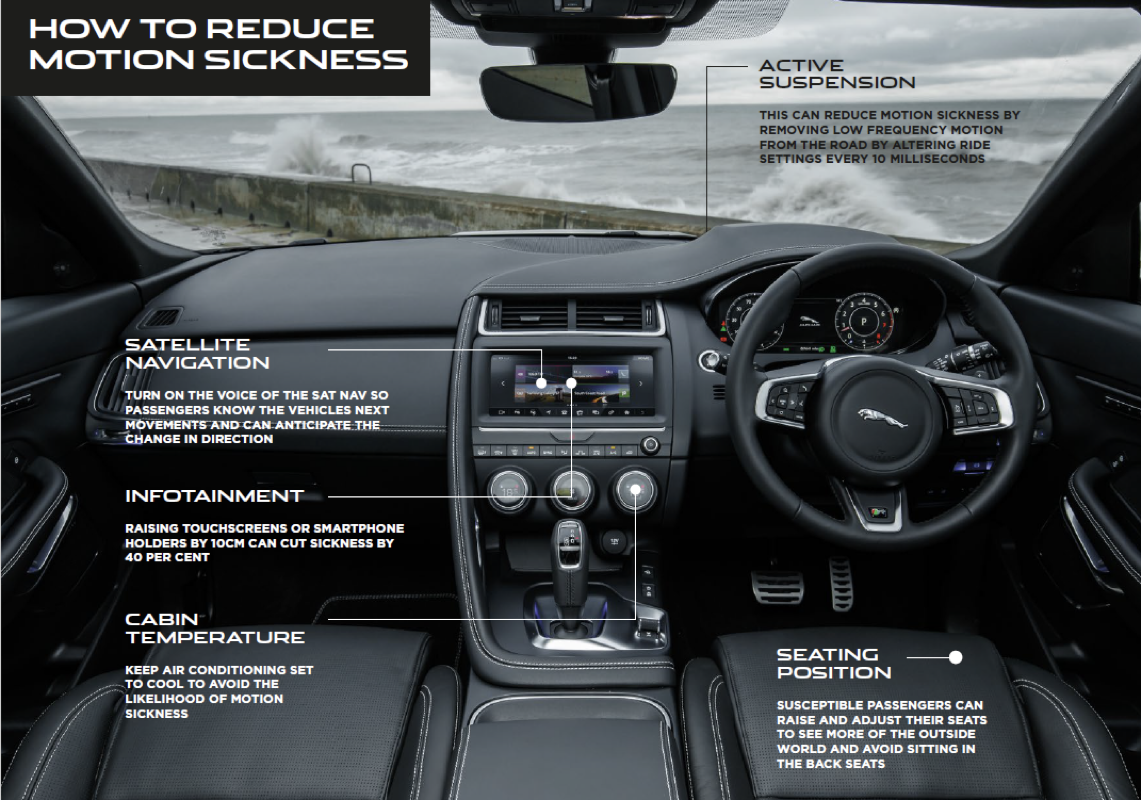 But it’s not the only one. People can fight against car sickness by sitting in the co-pilot’s seat, looking forward instead of out their side window, making frequent stops, not consulting their cell phone, and avoiding copious meals before traveling. And if car sickness comes on nevertheless, we can always turn to science. There are medicines on the market, some of them very popular, to combat motion sickness on trips.

The solution can also be technological. Jaguar Land Rover has developed software to minimize the chance that people in a vehicle get sick when traveling.

Research about kinetosis by the company’s engineers has made it possible to develop an algorithm that generates a system to measure the wellbeing of each passenger. A system of biometric sensors registers different physiological signs (for example, the chance of suffering dizziness) and compares them with information about the dynamic movement of the vehicle. The car can detect when one of its occupants is about to get dizzy, even before he or she notices the first symptoms. 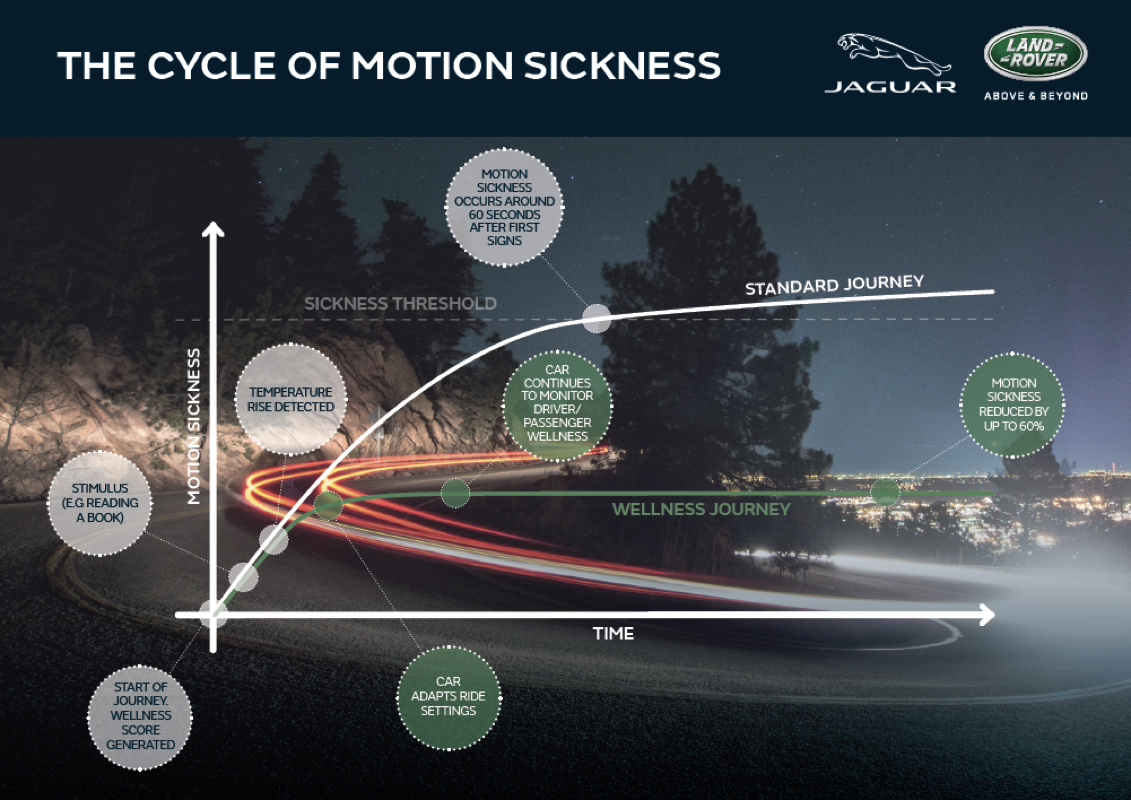 The Jaguar E-PACE is one of the vehicles that has this software. It has up to 26 different seat positions to find the best one for each occupant. In addition, its Adaptive Dynamics system reduces the vehicle’s movement on the road by modifying the parameters of the suspension every 10 milliseconds, thus ensuring that passengers always have the highest level of comfort. 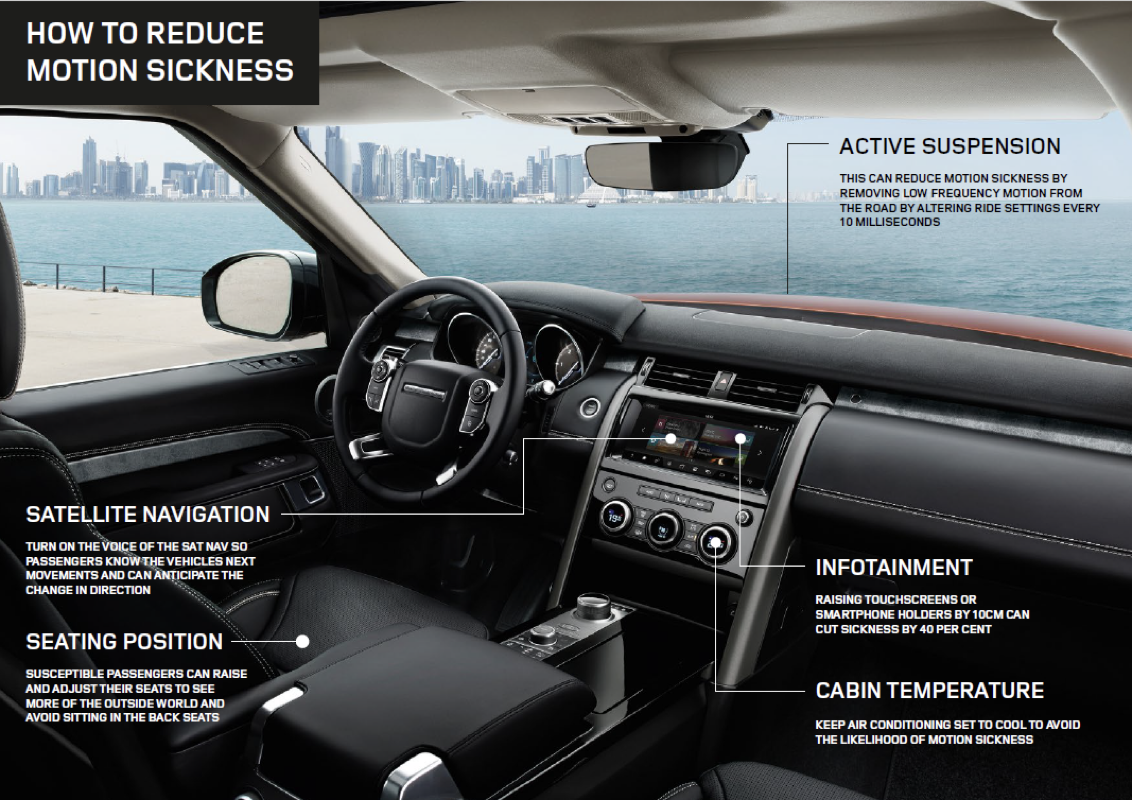 According to the firm, these innovations can reduce by up to 60% the possibility of suffering from car sickness in its vehicles. This is especially interesting now that we’re in the brink of having autonomous vehicles. According to Spencer Slater, wellness research engineer at Jaguar Land Rover: “As we get closer to a future of autonomous vehicles, where the occupants will have more time to work, read or relax during long trips, it’s increasingly important to develop vehicles that can adapt so as to individually reduce the effects of car sickness for each passenger.”