Bringing the principles of aeronautics to road transport: this is what two Colombian engineers with Spanish nationality, Abdon Estefan and Mauricio Vargas,  have done with the start-up Eco Eolic Top System and a device that they have named Run&Save.

The two entrepreneurs have explained in different media how their invention works, using a very familiar image. Do you remember when you put your hand out the window and the air pushed it up? Well, this is the same physical principle of Run&Save.

The idea, explains Vargas, came to his partner Estefan: What would happen if we applied some of the principles of aeronautical engineering, such as aerodynamic profiles, to try to reduce the weight of a truck? Until now, the aerodynamic studies that have been done for this type of heavy vehicles were based on reducing their DRAG (aerodynamic resistance), and never on reducing their weight. “That is because there is a sense that they can become unstable or that they will not fit under bridges. Or that the impact of the lift force against the DRAG can be troublesome,” explains Vargas. “There are many physical reasons why implementation is difficult, but therein lay the challenge, in finding a good idea and starting to develop it until it can be exploited.”

Explaining the operation of the device is not easy. As its creators explain on their website, “while the vehicle in motion reaches a certain speed, we use kinetic energy to increase the lift effect, which translates into a reduction in the weight of the load, significant fuel savings, less tire and engine life degradation, and reduced emissions.”

“Using the most recent aerospace technology, we adapt the surface of the truck to generate Lift that helps reduce direct transportation costs and greenhouse gas emissions,” they continue to explain. That is, the principle is the same as that used by airplanes. Aircraft plunge into air masses and take advantage of them to rise and fly. And they do it because the wind that circulates through the upper zone does so faster than the wind that moves through the lower one. Estefan and Vargas understood that this same principle, which is also applied to Formula 1 cars, to prevent them from flying away, could be used with heavy road transport.

In the first phase, the prototype is installed in the front area of the truck to reduce its aerodynamic load. “Now it is used for existing vehicles,” says Mauricio Vargas. “In this case, a complete cabin modification is very difficult, so we need to install a device. We are currently doing homologation tests with prototypes. In the next phases, with a good optimization, we will reduce the size and dimensions and improve its efficiency.”

Thus, the objective is “to be able to integrate this technology into future vehicle developments, where the reduction of DRAG is not only sought, as has been done in the last 30 years, but also to increase the Lift at certain times, on the road.”

Run&Save boasts a stabilization system and a slight reinforcement of the vehicle structure to prevent falls. For optimal operation, the truck must reach a speed between 80 and 120 km/h. The device’s software analyzes and controls the aerodynamic flow using artificial intelligence. “Controlling the way the air hits our device allows us to control the effect we wish to achieve in different sections. Thus, we developed software to move different control systems within the device, which allows us to reduce or increase the airflow,” explains Vargas. “Depending on the position of the truck, its acceleration, etc., it articulates that surface. If the truck turns to the left, our device adapts to the movement of the truck. It’s doesn’t just sit still on top of the vehicle, but actually adapts to the movement of the truck, in such a way that it sort of surfs on it.”

“AI is beginning to feed on this data. For example, on a route between Madrid and Paris there are 17 curves: 2 to the right and 15 to the left. If you already know exactly when the curves are to be taken, the system readies itself. So, the more you use it, the more it will be optimized,” continues the engineer. “In the future, we have thought of creating our own system as a manager that registers all weather data. Because, on a journey, the ambient temperature is not the same throughout the trip. The conditions are different, the wind is different, and the aerodynamic loads are different, and there is no manager for this. Our system would be the first manager to track this information on roads, rather than in a more general sense,” Vargas emphasizes. “It would pretty much draw an aerodynamic route of how it’s performing on roads. And if we get data on enough trucks, one could have a sort of Google Maps where you could find aerodynamic conditions or airflow maps en route.”

As explained by the founders of Eco Eolic Top System on their company website, this system reduces fuel consumption by between 22% and 30% and would save the atmosphere more than 2% of global CO2. emissions, which are currently estimated at 9% for heavy road transport. Other advantages are the reduction of tire and engine wear, as well as the reduction of wear and tear on roads and highways.

“Weight affects several factors,” says Mauricio Vargas. “Obviously, it affects fuel consumption, tire wear, engine wear itself, emissions… And depending on the type of truck, if it is very heavy, it also degrades the roads. Over time, the accumulation of heavy trucks wears down the tarmac. Having a device that reduces this weight on the roads, even if only slightly, in the long term will obviously lead to savings in the maintenance of road infrastructures.”

“Of course, friction is reduced,” confirms Adriana Estefan, Marketing Director of Eco Eolic Top System. “Having to lay new tarmac every three years is not the same as doing it every year and a half.”

But it must be clarified that the truck never leaves the ground. Run&Save only lightens the weight of the load, not the weight of the truck. “Removing weight from the truck would make it unstable,” cautions Mauricio Vargas, who believes that “flying trucks” is an exaggeration by the media to make the news more attractive. “Our device takes weight off the truck load. The truck still weighs exactly the same. Through our control surface, what we do is that the vertical vector, that is, the way in which the force is applied, is always in the center of mass of the vehicle, that it does not move. We are never making the truck unstable. And you will never see it take off from the road either. All it does is reduce its weight enough to make it economically viable.”

Adriana Estefan explains it best with an example. “It is as if you were in your vehicle loaded with all your suitcases and five passengers. And instead of that, [with a device like Run&Save] it’s as if you only carry a backpack and only you are in the car. Your vehicle weighs the same, but you are lightening the load.” 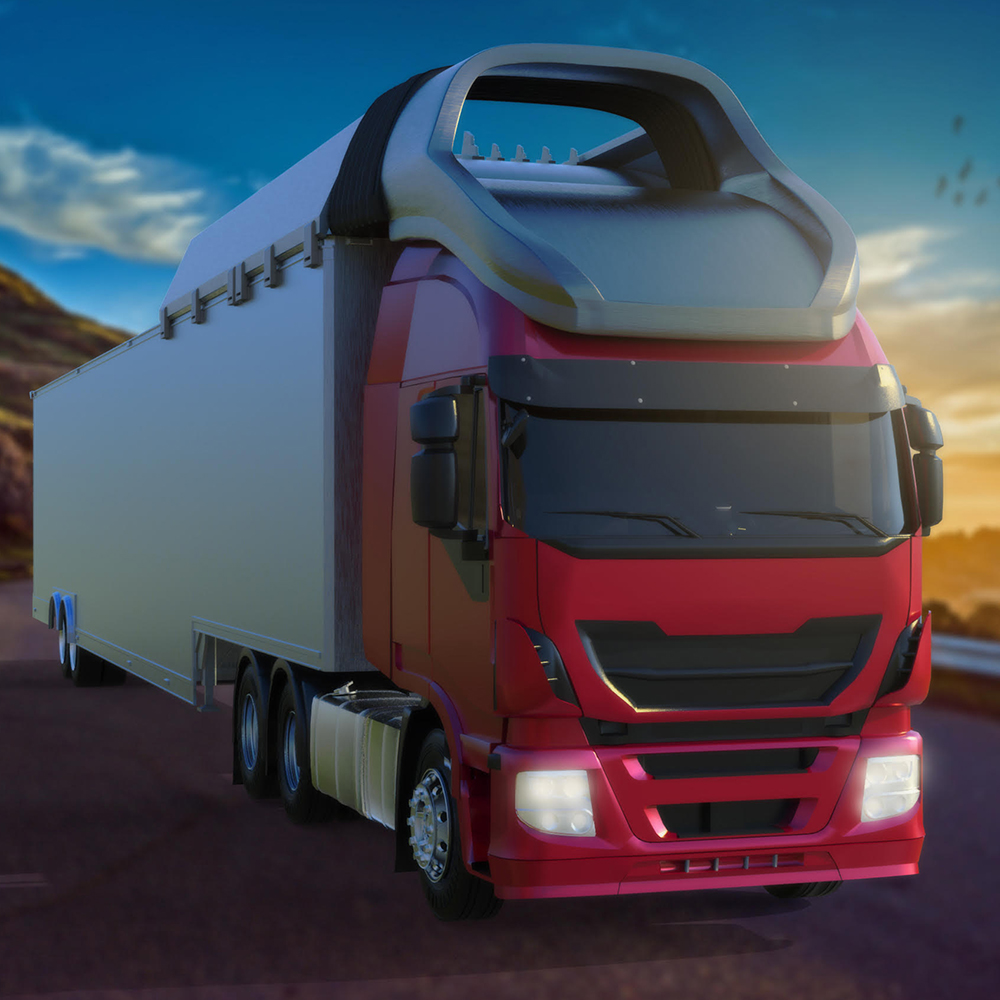 Based in Madrid (since it was in Spain where they were granted their first patent), Eco Eolic Top System has also opened a subsidiary in Canada and plans to expand internationally. The price of Run&Save will range between €12,000 and €15,000 and its makers claim that it can be installed in one day. It is estimated that the first prototypes will arrive in the first half of 2023 and there are already several companies interested in this device.

This is only the first development, but the system is valid for all types of land transport (heavy vehicles, cars, trains, etc.) and even some maritime transport. They have started with trucks to give themselves visibility. “Our goal is to produce a unified device for all vehicles with the same characteristics. We can’t take the one from a truck and install it in a small car. As we are in the homologation process, we are working vehicle by vehicle.”

Run&Save was one of the eight finalist projects of the eAwards in Spain, organized by the NTT Data Foundation.