Vehicles have been designed by and for men. That’s the opinion of the guidebook titled The autonomous vehicle through rose-colored glasses: Ideas for a more inclusive and fair autonomous car from the perspective of gender, developed by the Valencia Biomechanical Institute (IBV) and researcher Begoña Mateo. The guide is part of the DIAMOND European project, which is coordinated by the Eurecat Technology Center. That’s why it’s a good idea to change the perspective not just in the present but also in future automation. This guide concentrates on the cars that are still not here, those autonomous vehicles, and introduces the perspective of gender in their design, while stressing the needs of women.

The teams of engineers that design both normal and autonomous cars mostly consist of men. Both the technical and anthropomorphic parameters used in their design are based on masculine bodies, while ignoring different considerations like stature, weight and sex. And this is important because it affects the safety of those people who don’t fit into this standard model, especially women. Indeed, they have a 47% greater chance of suffering serious injury in the case of an accident, and a 71% greater probability of suffering moderate injury, even when investigators take into account control factors like height, weight, safety belt use and severity of a crash. To which should be added a 17% greater probability of dying if their vehicle suffers a serious accident.

Neither do these designers take into account the specific circumstances of the users of these vehicles. Thus while men use the car for what is usually direct travel, like moving from home to workplace, women must make several stops to leave their children at school or day care centers, go shopping, travel to a medical appointment, etc. In other words, the different roles of each sex must be taken into account, especially those of women, as caregivers.

Other factors that are also not studied are the fact that women use the car less than men –they walk more than men– and that many of them are harassed on public transport.

RECOMMENDATIONS FOR THE PROPER USE OF AUTONOMOUS VEHICLES

As explained in this guide, the autonomous car should take into account all these questions if it wants to achieve a fairer design. For this reason IBV makes a series of recommendations.

First, the design should inspire confidence in passengers –they are no longer drivers– who must now leave control of the vehicle in the hands of artificial intelligence and technology.

In addition, design should favor interaction among passengers, and this means that the interiors should be adaptable to every situation. Another consideration is comfort, so users can engage in other activities while in the car: reading, conversing, working… The car should offer good illumination and it should be possible to change the position of seats.

If we think of an autonomous vehicle as a means of shared transport, it should permit trips with multiple stops, for activities like picking the kids up at school, going shopping, etc. And when it is used by just one person, there should be the chance to park it while the passenger does what he has to do in his trip from point A to point B.

Naturally these vehicles should be safe enough to protect not just their passengers but also other vehicles and pedestrians. And they should allow the passengers to choose the way they will be driven.

Specifically, the guide wants these autonomous vehicles to take into account the physical characteristics and lifestyles of women. That’s why the female ergonomy should be one of the fundamental considerations when designing these vehicles. Things like pregnancy, for example, which directly affect the design of seats and seatbelts. And the guide also mentions the needs of other groups outside the typical young man user group, such as children and people with functional diversity.

The study presents “a wide range of technological possibilities that includes gender, and analyzes up to what point the development of this automobile sector is an advance over the traditional concept of the private vehicle,” says Begoña Mateo, the researcher who coordinates the project.

She encourages people to read the guide and stresses that “anyone who comes to know this work –whether a design professional, an automobile manufacturer or a public servant– will understand the importance of incorporating this information so as to design better vehicles, in addition to finding new ideas and concepts that can be applied to their work.”

The DIAMOND project, of which this guide is a part, is financed by the Horizon 2020 program of research and innovation of the European Union. Participating in it are 14 partners from the private and public sectors in Spain, the UK, Italy, Serbia, Poland, France and Ireland. 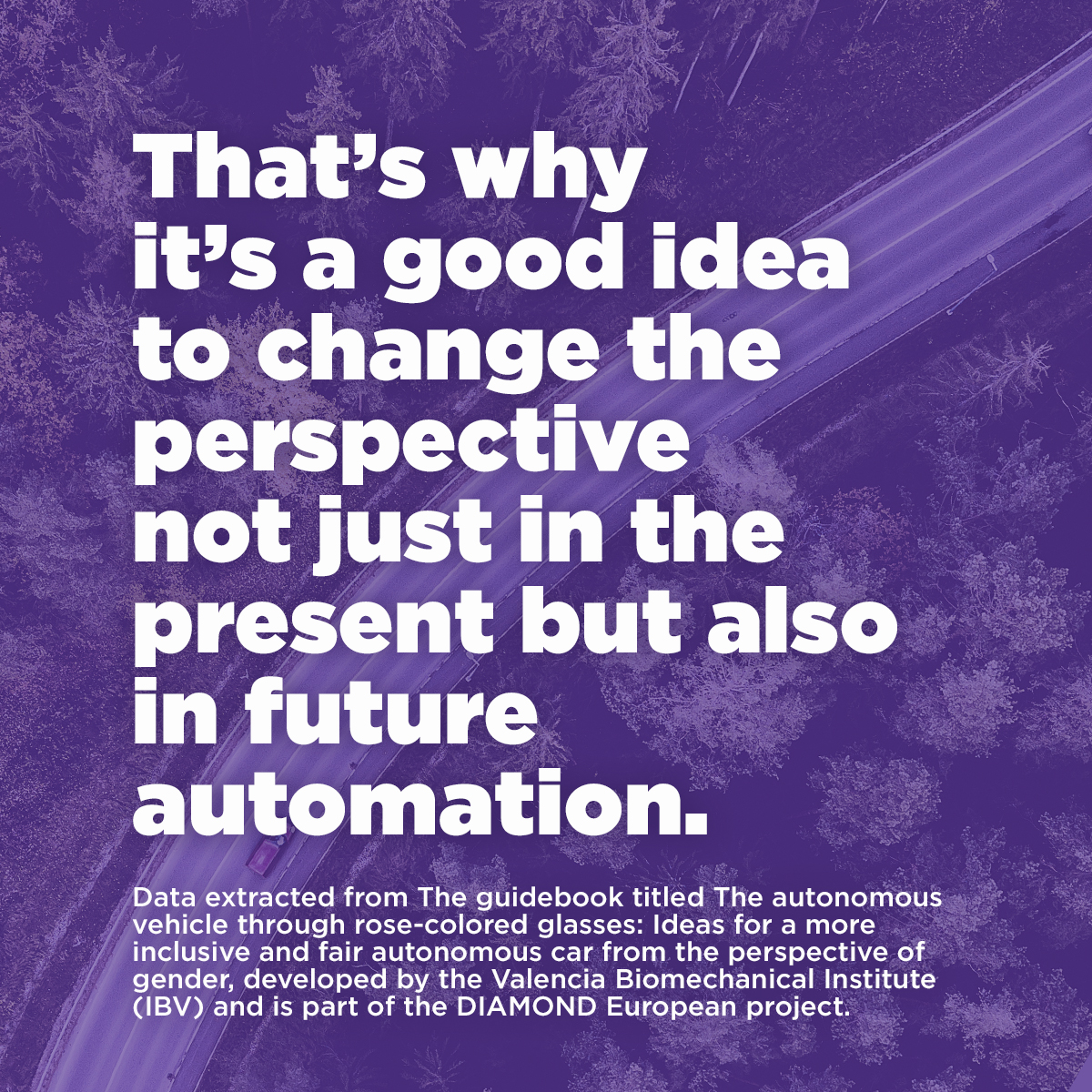