The first milestone in the construction of tunnels was the end of work in 1843 of the first modern tunnel in London, under the River Thames. With its opening, world engineering took a giant step toward modern systems of transportation. Being able to build roads under geographical barriers like rivers and mountains, without the need to go around them, opened the door for human transport systems to go (almost) anywhere.

Since then, tunnels have become one of the most useful infrastructures when planning highways and railroads. They not only make it possible to defeat obstacles the size of a mountain (literally) but to hide urban traffic underground, thus considerably reducing the length of roadways. Because in 2022, just as in 1843, the shortest distance between two points is still a straight line.

The tunnel under the Thames was an enormous advance in planning transportation, but was by no means the culmination of digging into the Earth’s surface to move things. In the almost 200 years since then, tunneling has continued to advance, making it possible to achieve some truly impressive works of engineering. What follows are the 5 longest tunnels ever built (to date).

Switzerland’s San Gotardo tunnel is part of the A2 motorway between Basel and Chiasso. When construction finished, it was the world’s longest tunnel, at 16.9 kilometers. It was built in the decade from 1970 to 1980, and was finally opened in September of 1980.

Between its inauguration and the end of 2005 there were almost 900 traffic accidents. The most serious one occurred in 2001, resulting in a fire that made it necessary to redesign the system so as to prevent a similar accident. Between the re-opening at the end of 2001 until  2002, there is only one-way driving (alternating every two hours in each direction).

The Jinpingshan tunnel in China has a total length of 17.5 kilometers and is located in the province of Sichuan. The tunnel leads to the Jinping dam (the highest in the world) and is not open to normal traffic: it is traversed only by authorized vehicles. For this reason, there is relatively little information about the tunnel.

Part of it is at a depth of 2,375 meters because it is just below the Jinpingshan mountains, making it the second deepest tunnel in the world.

The Zhongnanshan tunnel crosses the Qinling mountain range between Batour and Beihai, in southern China, for a distance of 18 kilometers. For seven years after its opening in 2007 it was the longest tunnel in Asia. It is part of the Xi’an Ankang highway, which connects the counties of Changan and Zhashui. Because of its location under the Qinling range, at some points it is 1,640 meters under ground.

Parts of the tunnel contain artificial plants and colored lights to prevent drivers, lulled by traversing such a long distance under the ground, from falling asleep at the wheel.

At 30 meters under the ground, the Yamate in Japan has a total of 18.2 kilometers. Construction began in 1992 and the first section opened in 2007, with the whole length opened in 2015. The Yamate tunnel contains the Central Circular Route of the Tokyo toll road, most of it under the city’s Yamate Street.

Besides being the second largest tunnel in the world, Yamate also has the honor of being the longest urban tunnel on the planet. 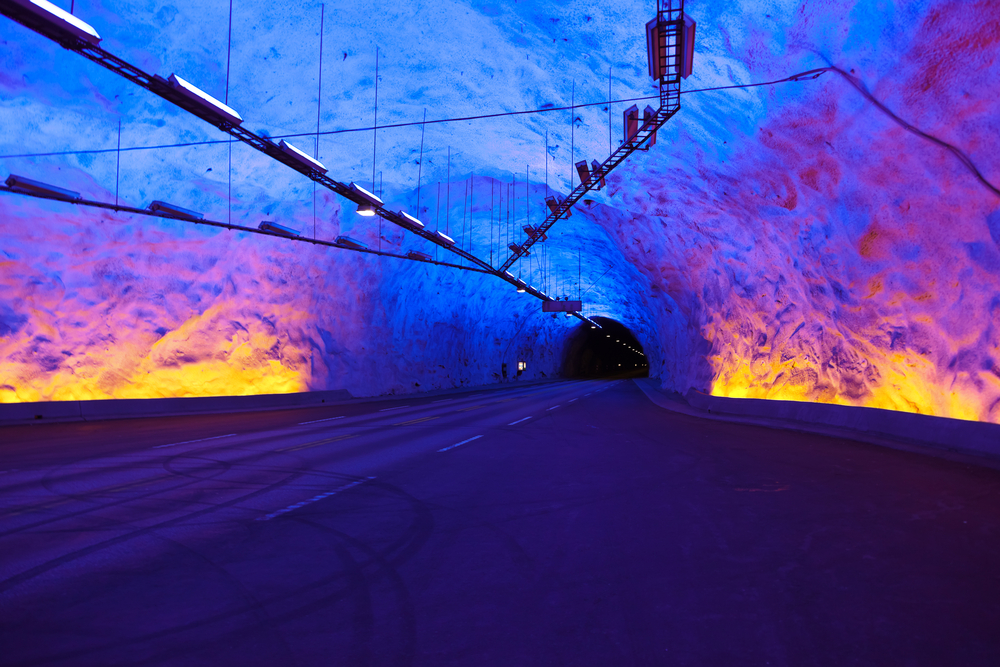 With its 24.5 kilometers, Laerdal tunnel is the longest in the world, traversing several mountainous formations between Laerdal and Aurland, in western Norway. Construction work began in 1995 and finished at the end of 2000. Because of its length, which takes 20 minutes to cover, the lighting has been designed to offset any stress among drivers. The resulting illumination gives the impression of daylight, and is so spectacular that it has led some people to hold their wedding inside the tunnel.

Along the tunnel, different caves make it possible to reverse direction, as well as to rest so that the route does not become too tedious. Even though there are no security exits, the telephones or fire extinguishers along the way can activate some luminous signs that warn other drivers that they should proceed to the nearest exit.

And if anyone on board wants some entertainment, the tunnel also provides internet connection.