Alfred Hitchcock knew how to promote himself as an artist decades before the creation of the “personal marketing” concept. World-famous for his introductions to the different chapters of the television series that bore his name, he took advantage of any opportunity for self-aggrandizement.

He sensed just what phrases the journalists would stress. One of the most famous: “I don’t drive because I’m afraid of the police.”

On another occasion he said that he stopped driving when he got to the United States (contracted by the producer of Gone With the Wind) because he was afraid of the traffic fines. He was 29. With time, the press created the myth that the director of Vertigo never learned to drive.

In articles about Alfred Hitchcock, the phrase “I don’t drive” was often evoked in reference to the scene in Psycho in which Janet Leigh sleeps in her car and a policeman in dark glasses wakes her up by banging on the bonnet. The scene is disquieting. Even though the character is a thief, we find her vulnerable: in the middle of nowhere in the American heartland, an officer of the law wants to know what she’s doing there.

A fear of the police comes from the director’s childhood. When he was six years old his father asked him to give a note to the police. The officer read the note and locked the little boy in a cell for an hour. The father had written: “Lock the boy up. He’s behaved badly.”

The scene in Psycho, like so many others in his body of work (notably The Wrong Man), reflects Alfred Hitchcock’s fear of authority. But it doesn’t reflect his fear of driving. His acquaintances and the Hollywood artistic community knew that the director drove his daughter to school and to church. Even today many publications continue to give credence to the legend, even though in 2008 Hitchcock’s driving license was auctioned off. It fetched close to 7,000 euros.

The license was issued in California in the name of Alfred Joseph Hitchcock and was valid until 1977 (three years before his death at age 78). The date of validity gives us an idea that Alfred Hitchcock intended to go on driving as long as his health permitted. The document includes a photo that shows an aging man, with ashen skin that reflects the flash of the camera.

Alfred Hitchcock’s real fear of driving was not of getting stopped by the police but of losing control of the vehicle. It was the director’s habit to create frightening scenes based on daily situations. (He detested movies with monsters and supernatural creatures.) What could be more everyday for many people than driving?

That’s why in some scenes Alfred Hitchcock’s characters are afraid of losing control of the steering wheel or of not being able to drive because they are in the co-pilot’s seat. They speed along narrow roads on the edge of the precipice.

Cary Grant is the favourite actor for getting into scrapes with a car. His face was versatile: he could appear dignified and sure of himself one moment, and then suddenly appear terrified and even ridiculous.

On two occasions the British actor is co-pilot when the female lead is driving dangerously.

In Notorious, the character played by Ingrid Bergman drives under the effects of alcohol. Grant keeps looking apprehensively at the speedometer while he smokes to calm his nerves. When Bergman steps on the accelerator, Grant moves his hand to within centimetres of the steering wheel. The adventure ends when a policeman orders the car to stop. In this scene the officer is not a disquieting figure but a guarantor of public safety. 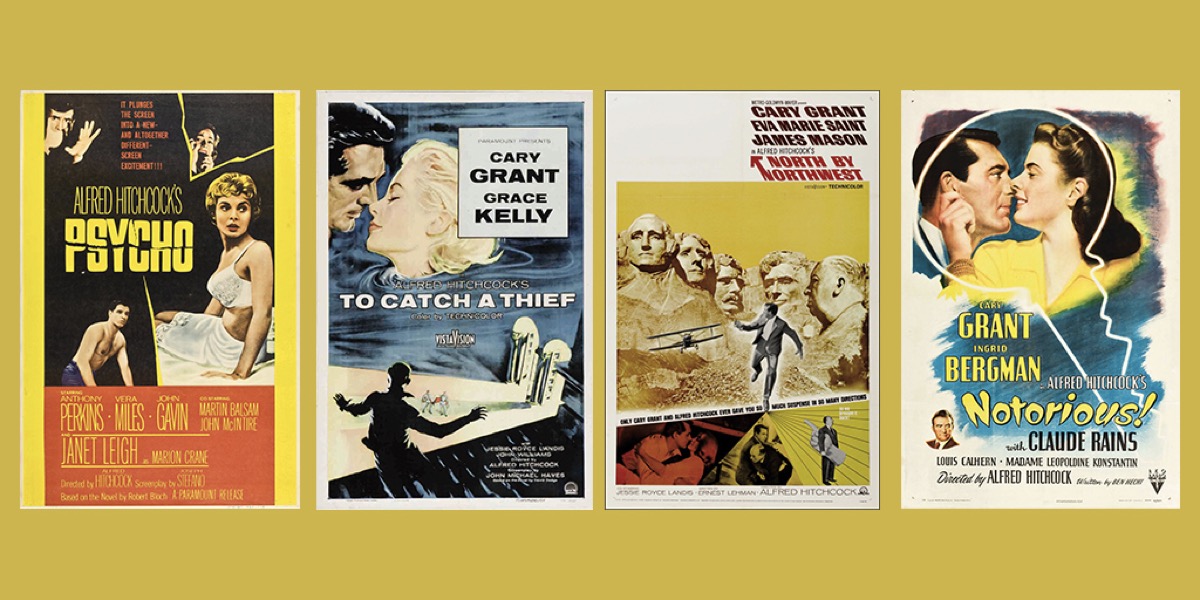 In To Catch a Thief, Grant is in the seat beside an audacious and very young Grace Kelly, who steps on the gas to elude the car that’s following them. Grant grabs his knees forcefully and grimaces (“we almost crashed”) when Kelly takes the curves along the cliff edges on the Côte d’Azur.

In Suspicion, it is Grant who drives dangerously near a precipice, which upsets Joan Fontaine, desperate because she thinks her husband (Grant)  may be a murderer.

In North by Northwest, Grant drives under the influence of the alcohol that the evil men commanded by James Mason have obliged him to consume. Grant’s gesturing would make the scene comic if it were not for the fact that he is in danger of a deadly accident if the car were to run off the cliff.

Alfred Hitchcock was an expert in bringing his own fears to the screen. It’s not hard to imagine him nervously driving along ancient, narrow stretches of roads without guardrails, the kind we now regard as obsolete as we drive along our modern superhighways.

Alfred Hitchcock used cars not only to create suspense but as a complement to his characters. He directed during the so-called Golden Age of the Automobile, and over the course of his career was able to reflect the development and aesthetic of cars, using the most modern models of the time.

Outstanding among them all is the 1950 Aston Martin DB2/4 coupé that the sophisticated Tippi Hedren drives in The Birds (1963). It was already 13 years old but had a refined, timeless design. The elegant Hedren deserved no less. It is in this vehicle that the stars of the film flee the town that has been infested by birds, wondering whether the bonnet will resist their attacks.